July marked the best month for the markets since November 2020.  Over half of the losses most investors experienced in the early half of 2022 have been recovered and most investors are left to wonder what comes next. What happened, after the rut of the first half? Some ideas:

The fly in the ointment? That pesky second quarter GDP contraction that could be interpreted as a sign that we are in or near a recession. But there is other, more positive data too.   Let’s get into the data:

What Does All of That Data Add Up To?

Determining whether we are in a recession is the province of the National Bureau of Economic Research (NBER). They don’t just look at GDP, and they are very measured in calling a recession. Given a broader range of data, including increasing GDI (gross domestic income), strong labor markets, and continued (if slower) wage growth, it’s possible we may not be in a recession.   This is the view of Fed Chairman Powell, from his remarks after the 75 basis point increase at the FOMC at mid-month. Even if we are in a recession, or if one is likely in the upcoming months, it may be mild and short. Chairman Powell telegraphed a likely 75 basis point increase in September but opened the “data dependent” door to potentially lower rate increases for the rest of the year.

The Fed is aware of the pain that fighting inflation is causing, but once it has achieved some “slack” in the economy – interpreted as lower employment – it may be willing to reassess future rate increases.

Remember, the Fed only has demand tools in its arsenal. It raises rates to lower investment, which puts downward pressure on growth, which impacts both jobs and wages, and eventually lowers inflation.   Inflation isn’t just demand-based. There is a big supply component, and that is still hostage to the invasion of Ukraine and ongoing supply chain disruptions.

Chart of the Month: GDP vs GDI: The Trajectories are Diverging

Gross domestic income (GDI) paints an expansion picture, and GDP signals a contraction. Economists look at an average of the two. They are both subject to revision, which usually puts them back on a parallel path. Research from the Fed has found that since the 1990s, initial GDI growth estimates tend to predict eventual revisions to GDP. 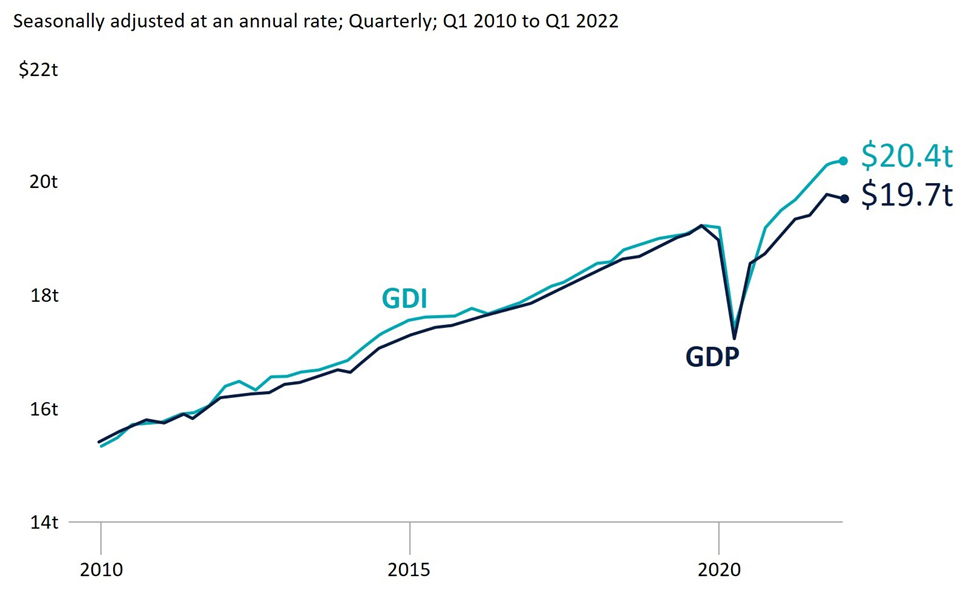 But what does that mean for you?

How should you prepare yourself?

Remember your goals and time horizons:

And finally, one big thing about mental and emotional health. Keep in mind that bear markets are generally short, and recessions end. Once you’ve done the necessary advance planning, don’t let the market volatility interrupt your life.  Behavioral and emotional circumstances create the most problems for investors. If you feel like some professional advice would help in this area, please reach and schedule some time to discuss!